June 10, 2021 Posted in US Sportsbooks Sites News by Hannah N • No Comments

The Brooklyn Nets will square off against the Milwaukee Bucks for game 3 in their NBA playoff betting series at the Fiserv Forum on June 10, 2021, at 7:30 PM EST. In the first 2 games, the Brooklyn Nets outscored the Bucks 240-193. Now the Nets come into this game going 54-25 straight up and 44-35 against the spread. The Milwaukee Bucks are coming into this Eastern Conference semifinal 50-28 straight up and 35-43 against the spread.

The online sportsbooks saw the NBA betting lines open with Milwaukee Bucks laying 4 points on the Nets. However, the betting line has moved to the Bucks listed as the 3.5 point favorite. The total opened up at 235 but is now sitting at 234.5 as they enter this Eastern Conference semifinal game.

Notes On The Brooklyn Nets For Game 3

The Nets won the first two games of this series convincingly, and they will be without James Harden or Jeff Green once again tonight.The Brooklyn Nets are being cautious with Blake, who injured his hamstring minutes into the first playoff game.

The Nets are having a good run over their last 12 games. But, they might have a problem tonight. You should be careful not to repeat history or something bad will happen.The Brooklyn Nets have dominated their first two games at home in the 1st round of the NBA playoffs. Despite this early success, they fell victim to Boston Celtics star Jayson Tatum’s 50-point playoff performance on Wednesday.

Blake Griffin made a few comments to the New York Post. He says

After that, he says

“We’ve basically done what we’re supposed to do.”

Brooklyn has been great at shooting and defending three pointers, outscoring Milwaukee by 64 points from behind the arc so far in the series. Joe Harris has led Brooklyn’s perimeter barrage by hitting eight of 16 from deep, while Kyrie Irving and Kevin Durant are a combined 17-for-40. Meanwhile, the Nets have held Milwaukee to 24.6 percent shooting from three-point range.

Notes On The Milwaukee Bucks For Game 3

Milwaukee Bucks coach Mike Budenholzer refused to panic after his team was hammered by the Brooklyn Nets in game three of their NBA playoff series on Monday.“

Milwaukee won four of the games following a game where they lost by 20 points or more. These wins were by an average of 18.8 points.But if the Bucks want to turn their series around, they need better play from their two top stars.

Milwaukee Bucks star Giannis Antetokounmpo scored just 18 points in Game 2 of the team’s playoff series with the Brooklyn Nets.Khris Middleton, all-star teammate of Giannis Antetokounmpo who is one of the catalysts to Milwaukee’s franchise renaissance, has averaged just 15 points per game in this series. 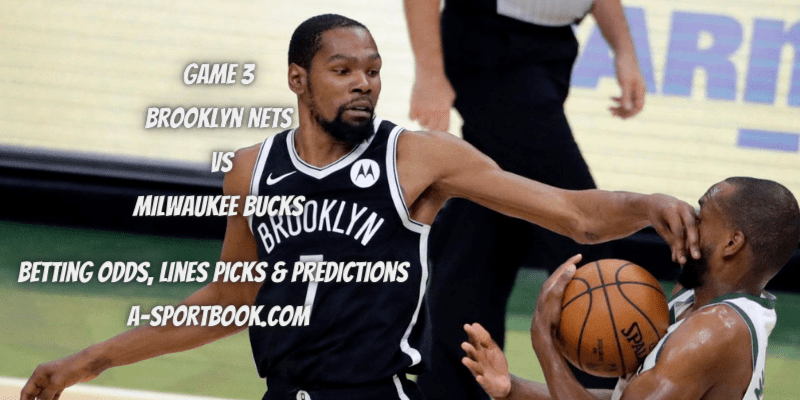 The Bucks need to bring a much better effort in Game 3 or this will be an easy series win for the Nets.

Tagged with: USA • Where Can I Bet Online