September 16, 2016 Posted in US Sportsbooks Sites News by Hannah N • No Comments

The New York Giants made moves in the off-season to shore up their defensive problems, and believe us when we tell you there were a lot of them; in fact, this team gave up more yardage anyone in the league. Right down there with them was the New Orleans Saints, who, judging by the season opener, have not made a lot of corrections to what went wrong in the 2015 campaign.

Well, the Giants’ stop unit will get its first big test on Sunday as they square off against Drew Brees and the New Orleans Saints in a game that begins at 1 PM ET at MetLife Stadium in East Rutherford, NJ. BetAnySports customers not only get to make their deposit using the virtual currency of Bitcoin, enjoy great Asian casino action, and use reduced juice to their advantage when they do their football betting, but they also can continue to place wagers even after the opening kickoff through the phenomenon known as Live Betting Ultra.

The Giants were perhaps a bit fortunate to win last week’s game against the Dallas Cowboys by a 20-19 margin. In the final moments, Terrence Williams had caught a pass for the Cowboys and neglected to step out of bounds to stop the clock; otherwise, Dallas may have had another play or two to set up a potential game-winning field goal. New York faced off against a raw rookie at quarterback, as Dak Prescott made the start for the Cowboys, but this is a whole different ballgame, as Brees chalked up his 14th career game of 400 or more yards last week against the Oakland Raiders.

Unfortunately, things did not end well for the Saints in that one, as Oakland made the decision to go for a two-point conversion, rather than kick an extra point and send the game into overtime, when they scored a late TD. The result was a 35 34 loss, but Brees demonstrated that he still has what it takes, even at age 37.

The Giants made some beneficial acquisitions on defense, including pass rusher Olivier Vernon and run-stuffer Snacks Harrison. They also got Jason Pierre-Paul back, and, they hope, in a healthier frame of mind after his disastrous hand injury last summer. This team did not register a sack against the Cowboys, but they did have 15 quarterback pressures, and afterward they explained that they were a little tentative with sending people after Prescott because of their unfamiliarity with him.

They have to deal with the New Orleans arsenal once again. Brandon Cooks and Willie Snead combined for 15 receptions and 315 yards. Former Heisman Trophy winner Mark Ingram had 58 yards on the ground, but really, the Saints didn’t need much of a rushing game because Brees was really making his throws count, averaging 10.1 yards per attempt and tossing four touchdowns without an interception.

BetAnySports patrons and Bitcoin sports bettors alike know that the Saints will give up just about as much as they gain, if not more. Against the Raiders, they allowed 8.4 yards per passing attempt and 6.4 yards per rush, and that is sub-standard. Eli Manning, who went a modest 19 out of 26 last week in Dallas, has a full set of receivers for a change, and that not only includes Odell Beckham, but also Victor Cruz, who taught caught a touchdown pass at AT&T Stadium in his comeback from injuries, and rookie Sterling Shepherd (who also scored), the second-round draft choice out of Oklahoma from whom much is expected.

Last year’s game was a donnybrook, to say the least. New Orleans won a 52-49 decision that went right down to the wire. There were 840 passing yards in the game. Brees tied in NFL record with seven TD tosses, while Manning had six. So it looks like were going to see a lot of fun in the Meadowlands this Sunday.

And if you REALLY want to have some fun, climb aboard with BetAnySports this weekend and get not only the best Asian casino action, but the most choices on the wagering menu. Reduced juice is the standard for football betting, and you can stay active throughout the whole game with Live Betting Ultra…… Don’t forget that you can conduct all of your transactions using Bitcoin, which provides a lot of privacy and confidentiality, and which never carries a fee. Just use their automated system and everything will be headache-free! 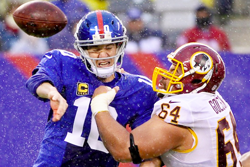 Article Name
Football Betting Matchup: New Orleans Saints at New York Giants
Description
Don't forget that you can conduct all of your transactions using Bitcoin, which provides a lot of privacy and confidentiality, and which never carries a fee. Just use their automated system and everything will be headache-free!
Author
Charles Jay
Publisher Name
A-Sportbook.com
Publisher Logo