May 17, 2016 Posted in US Sportsbooks Sites News by Hannah N • No Comments 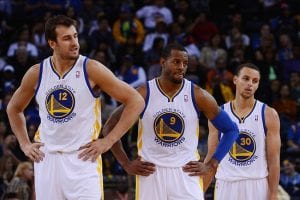 The Thunder unquestionably got a lot of confidence from their six-game win over the San Antonio Spurs, in which they took advantage of the weaknesses of the team that was thought to be ticketed for this round of play. How did they do it? Well, they got contributions from Russell Westbrook in ways other than just scoring; he shot only 37.6% in that series, but when he decided to become primarily a distributor, he was extremely effective. Teams are aways more difficult to defend if they can spread it around a little, and when Westbrook did that, and kept his “Usage” rate down, it brought results.

OKC also capitalized on the fact that Tim Duncan just didn’t show up for the Spurs. At that point San Antonio was thin up front, particularly on the defensive end. Well, that isn’t quite the case with the Warriors, where Andrew Bogut finds himself battling some injury problems, but can throw a lot of other guys out there, including Marqueese Speights, Anderson Varejao, even James Michael McAdoo, aside from their great role players who are pretty flexible. BetAnySports customers may not refer to Draymond Green as a “role player,” but he probably fits the description of a “glue guy,” because he does so many things and really helps to keep this team together. He is, from his power forward spot, the team leader in assists. He has also contested more shots in the playoffs than anybody else. And because of all this, the Warriors have scored 145 more points than the opposition when he is on the floor, as opposed to being minus-29 without him.

The Thunder led the league in Offensive Rebounding Percentage this year and also leads all playoff teams with 14.8 second-chance points per game. So it can;t be emphasized enough how important it is for Golden State to keep them off the glass after misses. At the same time, the Warriors, on the other end, have to be able to meet with more success when it comes to grabbing their own offensive boards. They pulled down 15% of those opportunities against the Thunder in the three meetings, and that was their lowest figure against any opponent this season.

Westbrook was held in check, for the most part, by the Warriors. He shot only 34.7% overall against them, and only 16.7% from the arc. He hit only 33.3% of his attempts against Steph Curry and 31.3% when guarded by Klay Thompson. When someone dominates the ball as much as he does, that kind of inaccuracy can have some very detrimental effects. Yet the Thunder found themselves in a position where they could have won all three of this season’s encounters, because they were either tied or ahead in the fourth quarter in all of them. Yes, they had problems closing out games, but maybe after the uplifting experience against San Antonio, where Enes Kanter and Steven Adams hit the boards with a lot of enthusiasm, they can stay competitive all the way to the end.

The Thunder is priced at +345 to win the series at BetAnySports, where you can get a great free play bonus, not to mention reduced juice on all your NBA action. And there are plenty of great deposit options, including the virtual currency of Bitcoin, so there is simply no good reason not to come aboard today!