May 10, 2016 Posted in USA Sportsbook Bonus Promotions by Hannah N • No Comments 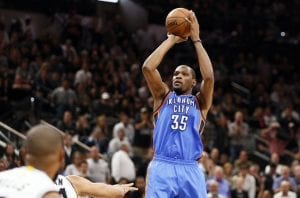 Oklahoma City got 41 points out of Kevin Durant in Game 4, as he hit 14 of his 25 shots. He was helped out greatly by Russell Westbrook, who had 15 assists on the evening. An added boost was provided by Dion Waiters, who scored 17 points off the bench, and Oklahoma City outscored San Antonio 34-16 in the fourth quarter, Durant hitting all six of his field-goal attempts. This was a definitive win for the Thunder, but they have to take their show on the road, where San Antonio has lost only one meaningful game this season. But fortunately for Billy Donovan’s team, that game was to them, as OKC evened the series in Game 2. Actually, the Thunder have pretty much outplayed the Spurs over the last three games, and that might come as a bit of surprise to BetAnySports customers who may have been expecting domination by a team that has now won 73 games on the season, inclusive of the playoffs.

The Spurs have to improve their ball movement. That was something Gregg Popovich made very clear while he was being interviewed by Craig Sager during the game, and when you look at the numbers, it is really stunning that they only had a dozen assists, compared to the 39 assists they rolled up in Game 1, when they beat the Thunder by 32 points at the AT&T Center. There was some balance, as three players had 20 or more points for San Antonio, but Tim Duncan was not one of them. He had no field goals and no free throws in Game 4, and has been a virtual non-factor thus far, with only 12 points and 15 rebounds for the entire series. This hurts the Spurs’ cause.

Oklahoma City has been rather poor from beyond the arc. That has not exactly been their strong suit all season, but they are below their season average, hitting only 31.6% of their attempts. And no one should really expect San Antonio to duplicate their futility from three-point territory, as they had only two of 12 triples in Game 4.

But BetAnySports patrons should be surprised if the Thunder have a rebounding edge. They have averaged 42 boards per game, giving them a 4.2 margin per contest in the series. The lack of contribution from Duncan has certainly been a factor there.

San Antonio is currently +245 two in the Western Conference title, as it is posted at BetAnySports, where you can get reduced juice wagering on all of your hoops action, not to mention the chance to continue wagering even after the opening tipoff, through the phenomenon known as Live Betting Ultra…… Remember that you can make your deposit using your Visa card, a person-to-person transfer or the virtual currency of Bitcoin!