Online Sportsbooks USA > US Sportsbooks Sites News > Where Can I Bet On The NBA Basketball Online?

Where Can I Bet On The NBA Basketball Online?

April 4, 2016 Posted in US Sportsbooks Sites News by Hannah N • No Comments

Have some people picked up the lack for all the players the Portland Trail Blazers lost in the off-season? It would certainly appear to be that way wouldn’t it? The Blazers have shocked some of the “expert” observers who had pretty much left them for dead at the outset of the season, and they have a chance to creep up in the Western Conference playoff order if they can win on Sunday night.

Of course, winning is a tall task when you have the Golden State Warriors standing in front of you. They are, of course, the defending NBA champions, and they are scaling new heights this season, a they chase down the record for wins in a season, which is currently held by the 1995-96 Chicago Bulls. With five victories in their last six games, the Warrior can get to 73.

But as BetAnySports USA casino customers have witnessed, there have been some trouble signs. The overtime win at Utah was scary for them at best, and that was followed by a mistake-filled outing against the Boston Celtics, who had taken them to overtime in their previous encounter Boston took advantage of 22 Golden State turnovers and hung with the champions all the way en route to a 109-106 win. In the process, the 54-game regular season home winning streak, already an NBA record, was ended. And all of a sudden, coach Steve Kerr, who just so happens to have been a part of that Bulls team that had produced both the longest home streak AND the most regular season wins, has a team that has committed 74 turnovers in a four-game period and holds just a four-game lead over San Antonio in the battle for the top seed in the West, with two more meetings on tap with the Spurs. 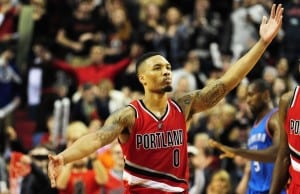 So in other words, there is work to be done.

And for the Blazers too. They have a 2.5-game lead over Dallas as they sit in the #6 spot in the West playoff queue, but thy are also a half-game behind the Memphis Grizzlies, so they have the opportunity to make up some ground. and that can loom big, since the Grizzlies, like San Antonio, have two dates on the horizon with the Warriors before all is said and done.

Damian Lillard would be getting some serious MVP consideration if a guy like Stephen Curry wasn’t around, but you can’t discount that his 25.1-point average has been a key to keeping this team afloat. Lillard is fifth in the league in scoring, and he has exploded against Golden State, with 51 points in a 137-105 romp the Blazers scored on February 19, and then 40 points in defeat on March 11. The Blazers, who are second to Golden State in three-pointers made (though by a considerable margin) have made 36 treys in the last two encounters. And in the three games these teams have played against each other, there have been 203 three-point attempts. So you just know it is going to be “bombs away” here, and all three meetings have gone comfortably over the total. Perhaps this is a caution along those line, but Portland has played five of its last six game under the total, while Golden State (2-6 ATS in its last eight) has been “under” in seven of its last eight.

BetAnySports offers great value to sports bettors in the way of reduced juice wagering, and also has creative deposit options, which now include Bitcoin! If you have ever wanted a sportsbook with all the extras imaginable, this is the time to sign up! Top

Tagged with: Online Sportsbooks • Where Can I Bet Online