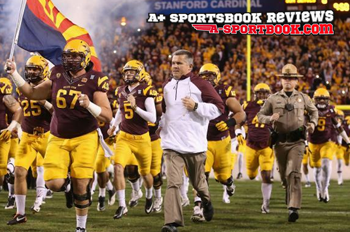 The Arizona State Sun Devils are one of the teams in the Pac-12 Conference that is not getting a lot of attention at the moment, among higher-profile programs like Oregon, USC and Stanford. On Saturday night they will try to put one more in the win column when they visit the Colorado Buffaloes in NCAAF betting action that is set to begin at 10 PM ET at Folsom Field in Boulder.

Colorado had expected to be improved, bringing eight starters on each side of the ball back for Mike McIntyre, going into his second season at the helm after leaving behind a success story at San Jose State. But the 31-17 defeat against Colorado State in the opening game was a major disappointment, and the Buffaloes didn’t exactly inspire much confidence with a 41-38 win over U-Mass, which has been a patsy since its entry into Division I ball.

Arizona State wants to be heard from in the Pac-12 when all is said and done, and they are currently ranked #14 in the country in the coaches’ poll, as well as #16 by the Associated Press (writers) poll. There have been no struggles thus far for the Sun Devils; they have glided past Weber State (45-14) and New Mexico (58-23).

In the NCAAF Sportsbook betting odds that have been placed on this game at BetAnySports, ASU is the road favorite:

This series has been very heavily in ASU’s favor; they have covered all five meetings, and their victories have come by an average of 29 points per game. In last year’s game, the Sun Devils were off to a 25-0 lead in the first quarter and cruised home with a 54-13 victory. In that contest, Arizona State had a 532-268 advantage in yardage.

NCAA football bettors know that having a senior quarterback is obviously a big boost, and ASU has one with some talent in Taylor Kelly, who has thrown 60 career touchdown passes – three of them this season. In the last two seasons he has sustained 70 sacks, so getting rid of the ball on time has been a problem with him.

But really, the key figure here is running back DJ Foster, the junior out of Scottsdale who came to the ASU campus with a lot of hype and may be rounding into form as a junior. He has exploded in these two games, running for 216 yards against New Mexico and adding 147 more against Weber State. he is averaging 10.7 yards per carry.

Will that average take a hit against Colorado? Well, that is hard to say, but BetAnySports customers can see that the Buffs had plenty of problems with that kind of thing against arch-rival Colorado State in the opener, allowing two backs to rush for at least 100 yards (Dee Hart and Treyous Jarrells), which is the first time CSU has accomplished that since 1996.

If there is encouraging news, it comes out of the quarterback position, where Seth Liufau, who impressed some people as a freshman last season, has picked up where he left off. Liufau has connected on almost 62% of his passes, with one interception in 81 attempts. But does he have enough firepower at his disposal to keep Colorado in this game? Football bettors should keep in mind that for what it’s worth,. ASU has covered five of its last six attempts as a road favorite.

BetAnySports has reduced juice and Live Betting Extra, which are just two of the many great reasons to sign up today for an account!