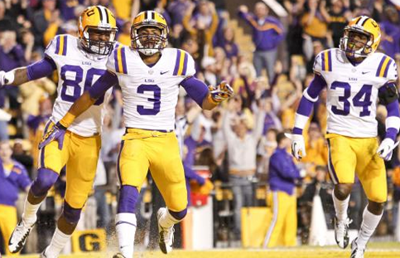 The LSU Tigers have to forge ahead with some transition taking place at the quarterback position, but that doesn’t necessarily mean they are going to lose a step. The faithful in Baton Rouge are very pumped up right now about a newcomer who they think could help this program scale new heights. It is the collegiate debut of Leonard Fournette, and most eyes of NCAA football bettors will be on him as the Bayou Bengals meet up with the Wisconsin Badgers at NRG Stadium in Houston (formerly Reliant Stadium, beginning at 9 PM ET.

Fournette comes to campus with an awful lot of hype. A Louisiana product (he went to St. Augustine High School in New Orleans), he ran for over 7500 yards at the prep level, and he has been rather brash about what he thinks he can accomplish in a Tiger uniform; namely, winning the Heisman Trophy as a freshman. Of course, Johnny Manziel already demonstrated that a first-year player could get it done. LSU should also have some help in the backfield with seniors like Terrence McGee and Kenny Hilliard.

In the NCAAF Sportsbooks betting odds that have been placed on this game at BetAnySports, the Tigers are the favorites:

LSU’s dilemma hasn’t necessarily been getting someone to run the ball, but rather, someone to throw it. Ultimately the start goes to Anthony Jennings, who quarterbacked LSU in the Outback Bowl last season. He will be more elusive than Zach Mettenberger, who was as good a pure thrower as anyone in the college game but had major difficulties avoiding pass rushes.

BetAnySports customers know that the Bengals, at least in the early going, may experience some problems at the receiver position, with the likes of Odell Beckham Jr. and Jarvis Landry going into the draft. But Les Miles has always been able to land talent in recruiting, so people at the skill positions should not be a major concern. Remember that there could be some variety under center, as freshman Brandon Harris is someone Miles will almost certainly use at some point.

NCAA football bettors need to be mindful of what Wisconsin has in the backfield. There is much to be said about Georgia’s duo of Todd Gurley and Keith Marshall, but Wisconsin may have the most dynamic combination with Melvin Gordon, a legitimate Heisman candidate who had 1609 yards last season, and Corey Clement, who averaged 8.2 yards per carry. There is a change at quarterback that must be noted, as Tanner McEvoy, who has transferred a couple of times (formerly at South Carolina) has won the job over last year’s starter, Joel Stave. At least they will have the protection from an offensive line that returns four starters from last year.

For those BetAnySports patrons who may be fans of football betting trends, Miles has won 45 consecutive non-conference games during the regular season. Can Wisconsin, which returns a total of only eight starters, keep up in what, regionally speaking, amounts to a more of a home game for LSU?

Get over to BetAnySports right now and get the best prices on this weekend’s games, along with live in-game betting options…It’s the best! Written By Charles Jay, Follow Charles Jay Google +.